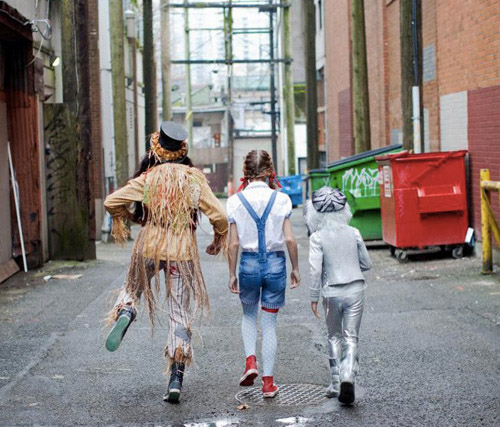 It’s that time of the year, again! Time to tune into the SAG awards, the People’s Choice Awards, the Golden Globe Awards, and the Academy Awards. Time to play into that glorious spectacle of excessive swag, and gold-plated reward, as Hollywood celebrates Hollywood in and around Hollywood. There’s nothing more lucrative than the business of escapism – the juggernaut that delivers far and wide. But if we take a step back – allow for a wider view – the razzle-dazzle that defines many of today’s celebrities slowly gives way to a less than glamorous backstory.

What is it that draws someone out of their every day, and into the dramatic arts? For some, the passion to perform came from a visceral desire to make their own escape. Hilary Swank, shunned as a child for living in a trailer park, took up acting at the local community theatre, starred as Mowgli in The Jungle Book, and never looked back. Leonardo DiCaprio turned his underprivileged beginnings around by following in the footsteps of a friend making good dough doing commercials. “How hard could it be?” he thought to himself, and the rest is history. Anne Hathaway, Michele Williams and Jennifer Lawrence – an early break-out star at the local church theatre where, at the age of nine, she played The Best Little Prostitute – each credit community theatre for sparking a flame that would grow beyond all imagination, back when success wasn’t measured by profit.

On Vancouver’s Downtown Eastside, daily life is far from Hollywood razzle-dazzle. Sisters Maureen Webb and Donalda Weaver, both veterans of the film industry, wanted to improve prospects for inner city, at-risk youth looking for an opportunity to step out of a life that can feel wholly stacked against them, sometimes. They began working on a plan to give back to the community they grew up in by providing theatre instruction, free of charge, to kids living in Strathcona, Mount Pleasant, and Downtown Eastside neighbourhoods. Their goal was to offer a safe place to nurture confidence, and encourage talents, before pernicious forces could take hold of shaky identities.

With money bequeathed to them by their mom, Maureen and Donalda began laying the groundwork for their dream theatre company: Project Limelight. The concept was to deliver top notch instruction from professionals within their field willing to donate their time and talent to children with a passion to perform. It’s an idea that caught the imagination of Canada’s beloved Corey Monteith. Mr. Monteith contacted his friend, Sir Richard Branson, and in May, 2012, Project Limelight was launched.

In the city of Vancouver, Arts Umbrella, Carousel Theatre For Young People, and, StageCoach Theatre Arts reign as most sought after theatre companies for children and teens. One week in Summer Camp at Arts Umbrella (9am-noon) will set you back close to $300., plus the expectation of a supplemental donations. If you’re a kid from the Downtown Eastside, fees for what these organizations describe as “accessible” theatrical experiences, are anything but.

Project Limelight provides theatre training at absolutely no charge to kids aged 8 to 15 years – no auditions required. During the first few weeks of instruction, students learn about movement, voice, clowning, and, acting. Then they move on to creative writing and staging skills, with a view toward putting on a grand, end of term musical at the Theatre at SFU Woodward’s. All rehearsals and performances are accompanied by a healthy meal.

“Above all, Project Limelight is about having fun, ” Ms. Webb tells me, adding: “Our waiting list has grown to over 100 children and we’ve had the incredible opportunity to introduce live theatre to young people throughout East Vancouver.”

Celestine Hilechi is just one example of confidence and talent nurtured by Project Limelight. Born in a refugee camp in Tanzania, Celestine moved to Canada ten years ago with her mom and dad, and three brothers. The family lives in a subsidized housing complex on the Downtown Eastside. With Celestine’s love of singing trumping initial fears, she joined Project Limelight at age 12. Within months she was signed by a Vancouver agent, and by age 13 had landed her first professional role. Celestine has since appeared in two television movies: Jinxed, and Grumpy Cat’s Worst Christmas Ever. She routinely brings down the house at every Project Limelight production, often moving audience members to tears with her incredible talent and powerful vocals.

“It just excites me to be on stage. At first I get butterflies,” Celestine tells documentary filmmaker Kirsty Matthews. “But then”, she continues, “when I get up out there, I’m amazed at how many people are there to see me, and the crew, and the cast, and everybody.”

The streets of the Downtown Eastside can appear cold and desperate, but inside Project Limelight, there is hope and a safe place to slip into a bunch of different roles. “I think what we’re building here is a community,” says Webb. “These kids can lean on each other, can lean on the program, can have a sense of belonging. Their self discipline improves as they go through the process, and the sense of pride that goes along with being a ‘Limelight kid’ carries forward into their home and school life.”

Sunday March 4th marks the 90th Academy Awards and we know what to expect: red carpet pageantry, $275,000 gift bags for A-listers, snappy emcee commentary to keep things rolling along. For most of us, it’s just a show. But for budding young thespians everywhere, it will be a night of inspiration.