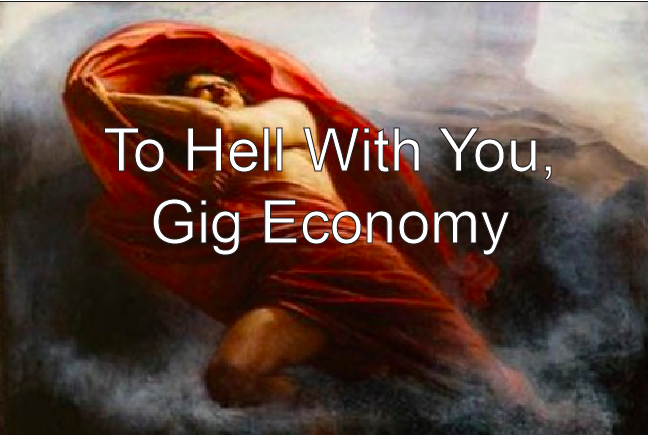 After reading Jacob Silverman’s Down and Out in the Gig Economy I was briefly compelled to do him a solid by sending him a copy of Dan Lyons’ ‘Disrupted: My Misadventure in the Start-Up Bubble,’ because both writers share a similar lament, but only one of them gets the message across without sounding like the entitled spawn of a privileged education who’s far too important for the “indignities that no worker should have to go through” as a freelancer, and accompanying shit pay.
The fact is I probably would have sent him the book – my own copy, inscription included –  had it not been for an acute gut feeling that Silverman doesn’t much appreciate being bested by fellow freelancers. 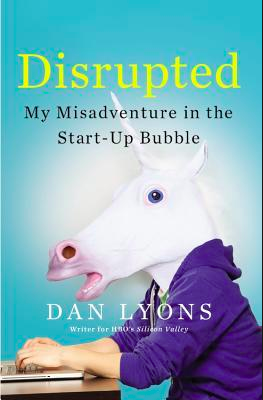 Gig the Guy, For God Sakes

Contrary to Silverman’s inability to leverage the benefits of a piece he wrote about self-promotion going viral, (or his book ‘Terms of Service: Social Media and the Price of Constant Connection’) Lyons has succeeded in parlaying the success of his above-mentioned book into all kinds of opportunities, including an episode he wrote for HBO’s Silicon Valley, and a second book.

Similar to Silverman’s account of his misadventures in a gig economy, however, Lyons’ book is a scornful rebuke of the house of cards upon which HubSpot’s spam-churning marketing model is built. It’s as much a lesson in the precariousness of full-time employ in the world of tech content as it is a warning about the precariousness of employ as a tech journalist yet, unlike Silverman’s sentiments, Lyons’ account is wonderfully crafted, hilarious at times, and it left me wishing I could kick back with the guy over a couple of beers and just listen to him talk.
Not so much with Silverman, whose gig economy death knell is betrayed by its whining subtext and a million different references to his “desperate worship of all things intellectual” (read: I’m super fucking intelligent but you’re all too stupid to see it.)
While Lyons never seems to forget his audience Silverman is so wrapped up in himself he forgets there is one (beyond the echo chamber.) I couldn’t get enough of Lyons’ 272 pages of insight and truth, while Silverman’s one article built around these same tenets felt like perdition.
I don’t disagree with Silverman – how could I? I just wouldn’t want to be the one tasked with editing his work, no matter how many beers were part of the gig.